Sir Jason Francis Kenny, CBE (born 23 March 1988) is an English track cyclist, specialising in the individual and team sprints. Kenny is the holder of most Olympic gold medals (7) and medals (9) for a British athlete. His wife, Laura Kenny, holds the same records on the female side, and together they are the most successful married couple in Olympic history where both spouses have won at least one gold medal (with 12 gold and 3 silver medals between them). Kenny's seven Olympic gold medals place him joint 15th by reference to gold medals won in the Summer Olympic games since 1896. He is the single holder of most Olympic golds and medals for a cyclist.

After winning World and European Junior titles in 2006 and achieving medals in the under-23 European championships in 2007, Kenny was selected to compete for Great Britain at the 2008 Summer Olympics in Beijing. With Chris Hoy and Jamie Staff, he won a gold medal in the team sprint, breaking the world record in the qualifying round. He finished behind Hoy in the final of the individual sprint, gaining a silver medal.

In January 2012, he gained his first world championship title, when Grégory Baugé's results were nullified after a backdated 12-month ban for missing a drugs test, and the Union Cycliste Internationale (UCI) promoted Kenny to the gold medal. At the 2012 Summer Olympics in London, he won gold medals in both the team sprint and the individual sprint, beating Baugé in the final. At the 2016 Summer Olympics Kenny again won in the Team Sprint and the Individual Sprint, and also won the Keirin. In the 2020 Summer Olympics he won the Keirin again.

Kenny was born on 23 March 1988. Kenny's parents are Lorraine and Michael Kenny, and he has an older brother, Craig. He was educated at Mount St Joseph School in Farnworth. In the run-up to the London 2012 Olympic Games, Kenny visited the school and praised the support he had received from his PE teachers.

He was a keen sportsperson during his youth, showing ability as a football goalkeeper as well as playing cricket and tennis, but having learned to ride a bicycle at a young age, became involved in track racing when he and his brother attended a track session at the National Cycling Centre in Manchester, when an uncle had booked a session and had some spare places.

Kenny's first track competition was when he competed in the Future Stars series, a junior competition held as part of the Revolution series at the Manchester Velodrome. Kenny competed in a number of the ad hoc events during the first season of the Revolution in 2003/2004. In the second season, he competed in the first fully-fledged Future Series competition, taking part in a number of sprint and endurance events for 15- and 16-year-olds, during the season of four track meetings. The series provided young people with the chance to compete in front of a crowd from an early age; it is known for providing opportunity for many young riders. When the 2004/2005 season finished in February 2005, Kenny was in the top 10 of the final standings.

During the 2005/2006 racing season, Kenny competed for Great Britain at a junior level as a sprinter and won world titles at the junior world championships. In the 2006/2007 season, he competed at a senior level for the team and took part in a number of World Cup Classics events across the world and Revolution events in Manchester, against some of the world's best Sprint riders. In the Revolution events in the 2007/2008 season, Kenny beat the world champion Theo Bos.

Kenny made his debut in the world championships in 2008, finishing fifth overall in the sprint competition. In the Olympic Games, he made the team sprint squad, replacing Ross Edgar at man 2 in the team just before the Games. The team defeated the French team that had beaten them to the world title in Manchester only months earlier by over half a second. In the sprint competition, Kenny reached the final, but was defeated by his teammate Chris Hoy 2–0. His rise as a cyclist has been rapid. He progressed from competing in a domestic junior series to Olympic Champion in only 3 and a half years.

Kenny was appointed Member of the Order of the British Empire (MBE) in the 2009 New Year Honours.

In the season following the 2008 Games, Kenny scored three gold medals in the 2008–09 Track Cycling World Cup Classics, and took a silver in the team sprint at the 2009 UCI Track Cycling World Championships alongside Jamie Staff and Matthew Crampton, losing out to France. In 2010 he took his first title at the European Track Championships, winning the gold in the keirin. At the 2012 World Championships, Kenny took a silver in the sprint behind Grégory Baugé and a bronze in the keirin.

At the London 2012 Olympic Games Kenny won gold in the team sprint with Chris Hoy and Philip Hindes, setting a new world record in the London Velopark with a time of 42.6 seconds. He also won gold in the men's sprint final, setting a new Olympic record in qualifying and avenging his previous losses to Baugé with a 200m time of 10.308s in his final lap. Kenny was appointed Officer of the Order of the British Empire (OBE) in the 2013 New Year Honours for services to cycling.

Following the 2012 Olympics Kenny competed at the 2013 World Championships, in the individual sprint and Team Sprint races he finished 7th and 6th respectively. He won the keirin event.

His 2013–14 season started with national titles in all three Olympic sprint, team sprint and the keirin. At the first round of the UCI Track World Cup he failed to qualify for the sprint event, whilst finishing 4th in the Keirin and winning a bronze medal in the Team Sprint. At the second round of the World Cup, he secured silver medals in the Sprint and Team Sprint, but did not contest the Keirin. The World Cup/Championships season finished with the UCI World Championships where he failed to secure any medals, finishing 5th in all three events he contested.

At the Commonwealth Games he won a silver medal in the Team Sprint. In the Sprint event he qualified 11th out of 12 qualifiers, and went on to lose his first round against Eddie Dawkins of New Zealand. This left him in the repechage, where he beat his Great Britain teammates Callum Skinner and Lewis Oliva to make it to the 1/8 finals. Despite his poor form in the early rounds, in the 1/8 round he beat Matthew Glaetzer, the fastest qualifier (qualifying almost half a second quicker) and holder of the Commonwealth record, in two straight rides, to secure his way into the semi-finals, where he beat Peter Lewis after three rides. In the final he won a silver medal, losing 2–1 to Sam Webster.

In the 2014–15 UCI Track Cycling World Cup, Kenny took a gold in the team sprint in the round in Guadalajara. 2015 brought national titles in the 1 km time trial and the team sprint. In the run up to the Rio Olympics, he was part of the squad that won gold in the Hong Kong round of the 2015–16 Track World Cup alongside Hindes and Skinner and went on to win the gold in the sprint at the 2016 Track World Championships in London, defeating Matthew Glaetzer 2–1 in the final.

At the Rio 2016 Olympic Games Kenny won gold in the men's team sprint with Philip Hindes and Callum Skinner. The trio broke the world record twice in the Olympic competition, first in qualifying and again in the final against New Zealand, after the latter had set a new world record themselves in the first round. He won gold in the men's individual sprint, beating Callum Skinner in the final after losing just one ride, to eventual bronze medallist Denis Dmitriev in the semi-finals. On 16 August Kenny won the gold medal in the final of the men's Keirin after the race was re-started twice due to derny infringements, to join Chris Hoy as the holder of 6 Olympic gold medals, more than any other GB athlete.

Kenny was appointed Commander of the Order of the British Empire (CBE) in the 2017 New Year Honours for services to cycling.

Following the Rio Games, Kenny made an unannounced retirement from competition, later stating that this was due to the physical and mental toll of cycle racing. However, after a year away from the track and the birth of his first child he decided to return to racing, stating in an interview in September 2017 that the break had "refreshed" him. Kenny made his comeback at a round of the Revolution series at Manchester Velodrome in January 2018, setting the fastest time in sprint qualifying ahead of a field that included rival Grégory Baugé and placing second in the sprint and keirin competitions. He returned to international championship competition at the 2018 UCI Track Cycling World Championships in Apeldoorn, where he was part of the silver medal-winning squad in the team sprint alongside Hindes, Jack Carlin, Ryan Owens and Joseph Truman, earning Team GB's first team sprint medal at the World Championships since 2011. Kenny, Carlin and Owens went on to earn two further team sprint silvers at the 2019 UEC European Track Championships, also held in Apeldoorn, and the 2020 World Championships on Berlin.

At the delayed 2020 Tokyo Olympics in the summer of 2021, Kenny, Carlin and Owens took another team sprint silver, losing out to the Dutch team in the final. Although this was Kenny's first loss in an Olympic final, the medal made him Britain's most successful Olympian. In the sprint, he placed eighth in qualifying, and his bid to defend his title received a setback when he lost in the 1/8 finals to Denis Dmitriev: although he was able to secure a slot in the quarter finals by winning the repechage, he was knocked out in the last eight by Harrie Lavreysen, losing 2–0 to the Dutchman before finishing last in the small final, securing eighth place overall. In the keirin, Kenny took the gold medal after going on the attack when the derny pulled off the track with three laps to go, building on a gap that had already appeared between himself and the rest of the field led by Matthew Glaetzer and holding on to the lead to cross the finish line with a gap of over three quarters of a second over the second placed Azizulhasni Awang. The win gave him his seventh gold medal and ninth medal overall, making him the British Olympian with most golds and most medals.

In September 2016, Kenny married the track cyclist Laura Trott. As of 2016, the couple live near Knutsford in Cheshire. On 14 February 2017, it was announced that the couple were expecting their first child; their son Albie was born on 23 August 2017. Kenny is a motorsport enthusiast and has participated in car racing in his spare time, including racing a Ginetta G40, and scored a podium finish in a round of the Radical European Masters at the Nürburgring in 2014.

Taken together, Jason and Laura Kenny have won 12 Olympic gold medals, which places them among the most successful Olympic medalist families of all time. 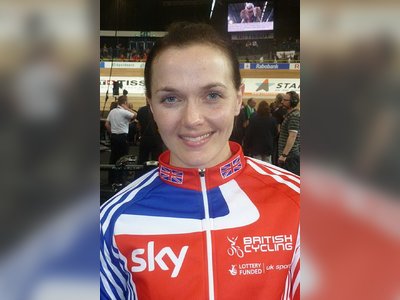 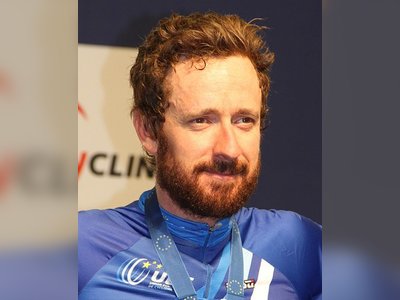